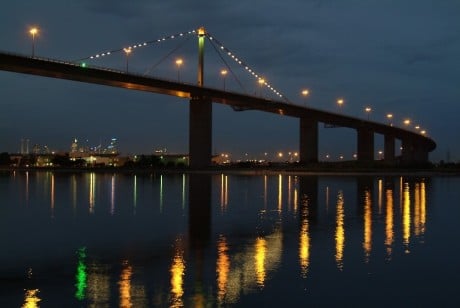 The state government has annonced important maintenance work post-Christmas on the West Gate Bridge to strengthen the road for the hundreds of thousands of motorists who rely on it every day.

To allow the works on the bridge three of the five inbound lanes will be closed from 7:00pm Thursday 26 December until 4:00pm Tuesday 31 December, with four inbound lanes closed each night after 9:00pm.

Motorists travelling from Geelong reigon are advised to plan ahead during the works, which could see delays of up to an hour for citybound traffic.

Crews will work day and night to apply a new waterproofing layer and refresh the asphalt surface on the inbound lanes. The work will boost reliability for the more than 205,000 people who drive over the bridge each day.

As Victorians get ready to wind down and set off on summer holidays, motorists are urged to ensure items tied to or packed in their cars, utes and trucks are secure, with the amount of debris left on Melbourne’s roads expected to rise over the coming months.

Minister for Roads, Road Safety and the TAC Jaala Pulford has recently visited the Department of Transport’s Incident Response Services (IRS) depot in Fishermans Bend to get a first-hand look at how the team keeps more than 170 kilometres of the city’s roads clear and safe 24 hours a day.

The IRS team travels about 10,000 kilometres each month patrolling Melbourne’s freeways and major roads, responding to crashes, vehicle breakdowns and other incidents while clearing debris and chemical spills to keep people moving across the road network.

The team responds to around 40,000 incidents annually, while working closely with police and emergency services to ensure the safe and timely management of any road issues.

The West Gate Bridge maintenance is part of more than $870 million invested in road maintenance by the state government over the next two years and is part of a record amount of work being carried out on Victoria’s Big Build over the summer months.

WILDLIFE WONDERS ON TRACK TO OPEN MID-2020!
Scroll to top