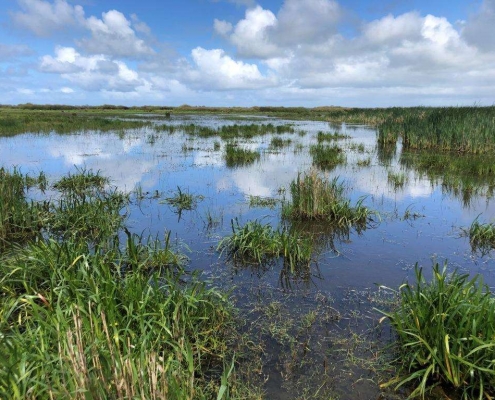 The City of Greater Geelong has released a draft 20-year master plan for the Sparrovale Wetlands, a new world class 500-hectare nature reserve being created near Armstrong Creek.

The mix of natural and constructed wetlands will be home to a vast range of plant and animal life, protecting and increasing the region’s biodiversity and serving as a major drawcard for locals and visitors.

Under the draft plan, the reserve will also recognise and celebrate the local Wadawurrung heritage, as home to 39 registered Aboriginal archaeological sites within a 5km radius.

Development of infrastructure at the Armstrong Creek Urban Growth Area is a key ask under the G21 Regional Growth Areas Priority Project.

Sparrovale Wetlands will feature around 140 hectares of public open space, and provide a crucial drainage solution for the growing population in Armstrong Creek.

The draft master plan divides the development of the wetlands into three phases:

Have your say on the draft Sparrovale Wetlands master plan here.

The Sparrovale Wetlands adjoin the Barwon River and the internationally significant wetlands of Lake Connewarre and Hospital Swamps.

The draft master plan has been developed with input from Parks Victoria, the Department of Environment, Land, Water and Planning, the Corangamite Catchment Management Authority, the Wathaurung Aboriginal Corporation, Geelong Field and Game, the Geelong Field Naturalists Club and the Barwon Heads Association.