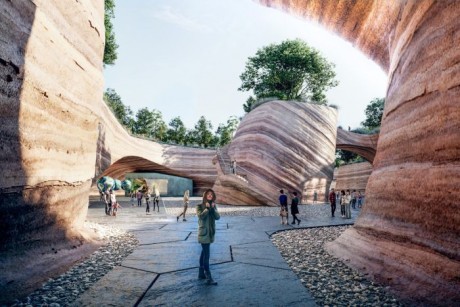 With landholdings framed by the Great Otway National Park, Anglesea Heath, Anglesea River, the Great Ocean Road and the Anglesea township, Alcoa’s former power station and mine site presents a once in generation opportunity to create outcomes of significant value to Anglesea and the broader region.

Following extensive community engagement, Alcoa published a Concept Master Plan for its freehold landholdings in 2018 with a vision to connect people to Anglesea’s valued landscapes; create a new tourism destination for Anglesea and the Great Ocean Road; and create economic opportunities for Anglesea and the wider region.

Economic modelling shows that Eden Project Anglesea would create more than 1,300 new jobs and generate $350 million in the Surf Coast Shire in the first 10 years of operation.

The eco-tourism destination would create more than 500 ongoing full-time jobs with 300 at the site and an additional 200 jobs supported in the wider region. This represents almost four times the number of workers at Alcoa’s former power station and mine.

The project is recognised as a G21 priority under the Great Ocean Road project, with G21 providing in principle support to the project as it moves through the planning and rezoning approval process.

Chief Executive of Eden Project International David Harland, who presented at the G21 Stakeholder Forum, said: “Anglesea is a fantastic place and we want Eden Project Anglesea to enhance what the town already provides to locals and the wider region.

“The project will offer greater tourism opportunities, bring more jobs to the local economy and build on Anglesea’s history of strong environmental stewardship.

“The economic projections for the Surf Coast region are similar to what we have achieved in Cornwall through our commitment to partnerships with the local community.

“While the economic benefits are hugely significant, our engagement with the Traditional Owners of the land, building our partnerships in biodiversity and continuing our involvement in active community engagement and consultation remain priorities at this time.”

“Eden Project Anglesea will be a key part of achieving this vision with the job projections well exceeding the permanent Alcoa positions at the former mine and power station site.”

The critical next steps for Alcoa and Eden are the resolution of the water strategy to fill the mine void and determining the relevant planning process for the next phase.

WHERE ARE WE AT? GROW START UP REVIEW

WORKSAFE CEO TO STEP DOWN
Scroll to top