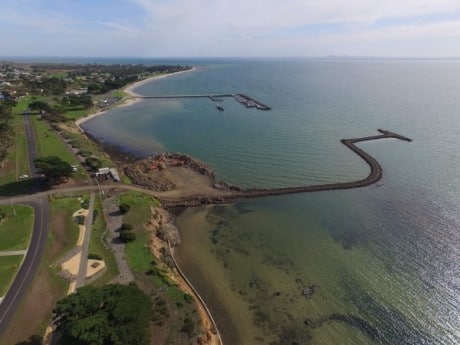 Victorians and tourists will continue to enjoy a ferry service from Portarlington to Docklands as the State Government and Port Phillip Ferries build public transport for the future.

From tomorrow, ferries will run out of Portarlington, giving local commuters another travel option and bringing tourism to the Bellarine. A new schedule and pricing arrangement will also be available.

Work is underway to raise speed limits on the Yarra to appropriate levels – which could slash journey times by up to 15 minutes. This is on track to be in place early in the new year, subject to a safety and environmental review.

Commuters and day-trippers will be able to use the service throughout the coming summer months and for the Christmas school holidays, as tourist numbers swell across the Bellarine.

Construction continues on the $15 million Portarlington Safe Harbour project that includes provision for dedicated ferry berthing. These works are progressing well and will be completed in early 2017.

The Government and Port Phillip Ferries are working through the final details of the agreement. Services out of Wyndham Harbour will not be renewed at this stage.

We’re supporting the local Bellarine economy and ensuring our state remains a tourism hotspot well in the future.

Minister for Water Lisa Neville said, “The Victorian Government was elected to put people first, and we’ve spent every day of the last two years achieving that by giving Victorians and tourists the transport services they need to get around our state. During the busy summer months when tourism swells across the Bellarine, this will be a great way to commute to the city.”

Port Phillip Ferries Owner Paul Little said, “My vision has always been using Port Phillip Bay more effectively for commuters and visitors to our wonderful city. This is an exciting time as we see the bay opened up for commuters, particularly those living on the Bellarine Peninsula, and for Melburnians travelling the other way. We hope to extend the service to other regions of our bay once services for Portarlington are established.”