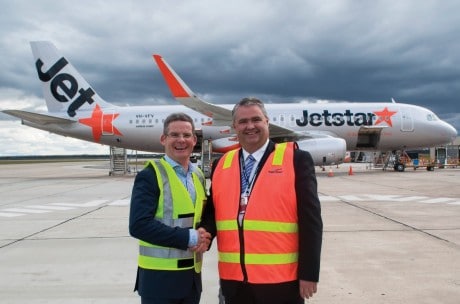 The State Government has today (19 August 2016) helped secure Avalon Airport’s future with a $1.5 million investment to develop an industrial precinct that will create much needed jobs and boost the local economy.

The funding will enable the development of a 40 hectare industrial precinct on the vacant north-west corner of the site that will help diversify its operations and attract further investment.

Avalon operates as Victoria’s second major airport and is home to the biannual Australian International Airshow.

The Government’s investment towards the $5 million infrastructure project will ensure Avalon can reach its true potential by unlocking the proposed industrial precinct.

A key part of the infrastructure project will be the delivery of high voltage electricity, gas, water, fibre optics and communications infrastructure.

Developing the industrial precinct will also make it ready for investment that will further expand the sites use and create more jobs for the Greater Geelong region.

This announcement follows the Government’s strong support for Avalon, which includes delivering a landmark 10 year agreement with Jetstar to protect and enhance passenger services.

Premier Premier Daniel Andrews says, “Avalon Airport has a bright future ahead of it and with this investment it has the potential to be a major industrial and commercial jobs hub. When we got elected, Avalon was under threat. Not only have we saved and grown passenger services but we’re helping write its next exciting chapter. The Labor Government is working hard to ensure businesses realise their full potential. It’s why we’re getting on with creating job opportunities and investing in projects that make a difference.”

Avalon Airport Executive Chairman David Fox says, “Avalon Airport is grateful for the Victorian Government’s contribution towards its investment in establishing a new industrial precinct.  This project is the first since the approval of the Master Plan in September last year and provides a great opportunity to diversify businesses and generate jobs for the region.”