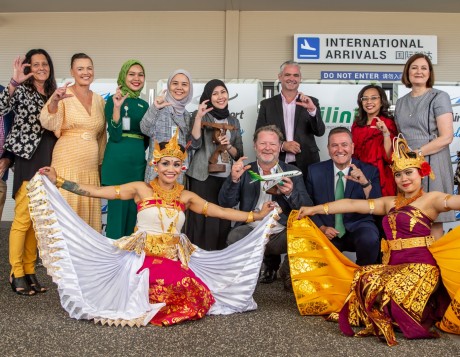 Direct flights between Bali and Avalon have commenced, marking a second international destination for the airport.

Bali is one of the most popular tourist destinations for Australians with an annual visitation of almost 1.2 million per-year.

Famous for its luxury resorts, beaches, temples, warm hospitality, shopping and surf, this service will prove popular with travellers from the G21 region who want an easy, affordable travel option to the Indonesian holiday spot.

The service is expected to add 123,480 seats to and from Bali in 2020, which will contribute to a forecast 19.7 per cent growth in seats between Victoria and the Indonesian hot spot.

Citilink is a subsidiary of highly regarded parent company Garuda Indonesia Airlines. Established in 2001 as a low-cost shuttle service between cities in Indonesia, it expanded in 2012 to become an independent business entity.

The airline began flying between Perth and Bali last November, but this is their first operation to the eastern states.

The state-of -the-art Airbus A320NEO, carrying 178 passengers and cargo will depart Avalon daily at 12:50pm local time, with the return flight landing at Avalon at 8:50am local time each day.

The flight times have been carefully scheduled to ensure a convenient arrival into Bali of 4.20pm local time, which will also provide good connections throughout other parts of Asia through the Citilink network.

The partnership begins an exciting year for Avalon Airport, which recently announced the commencement of flights to Vietnam with Vietjet, celebrated its one-year anniversary with AirAsia, and took out the Australian Airports Association’s Major Airport of the Year Award.

For details about Avalon Airport, its flights and services: avalonairport.com.au