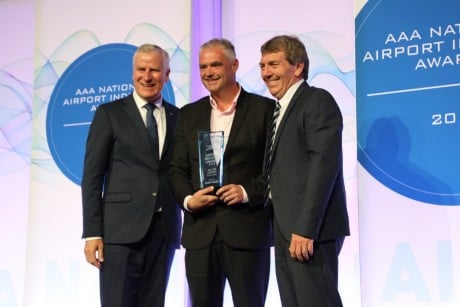 Avalon Airport took out the Major Airport of the Year Award at the National Airport Industry Awards recently (20 Nov 2019) on the Gold Coast.

The Awards are held annually by the Australian Airports Association, and celebrate achievements and contributions made by AAA Members over the past financial year.

Avalon Airport CEO Justin Giddings said he was honoured to accept the award on behalf of the airport, acknowledging the recognition this award makes of everyone working at Avalon and Linfox.

He acknowledged the airport’s Board of Directors and the Fox family for their significant dedication and investment.

“Thanks also to the Victorian Government for not only its contribution but also ensuring Avalon remained operational through some pretty tough times.”

The Australian Airports Association is the peak body for Australian airports, representing the interests of over 340 airports and aerodromes across the country.

The Awards are held as part of the AAA National Conference, the pre-eminent aviation conference and exhibition in the Asia Pacific Region.