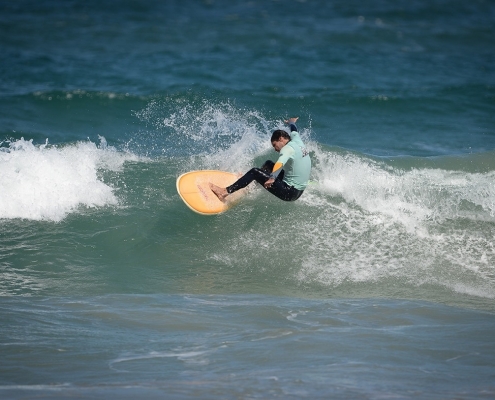 Teams of seven will take to the waves at Bells for the Bolt Blowers Invitational on Easter Saturday.

In collaboration with the Bolt Blowers and the Surf Coast Shire Council, the event will raise money for mental health charity One In Five and Aboriginal mentoring organisation, Strong Brother, Strong Sister.

The cancellation of the 2021 Rip Curl Pro has created the ideal opportunity to raise the profile of this event and the issues surrounding mental health, particularly in a year when many have suffered due to the COVID-19 outbreak.

The event features a team format with seven surfers competing in succession with their total scores tallied to find the winner. All surfers must ride either an original single or twin fin board that predates 1983.

The world-famous Rip Curl Pro will return to the Surf Coast next year under a new three-year agreement with the state government and World Surf League.

The international surfing competition had been held at Bells Beach every year since 1961 but was cancelled this year due to coronavirus.

The funds donated to Strong Brother, Strong Sister will allow Aboriginal young people to access a positive Aboriginal Mentor once a fortnight to learn how to surf, water safety, surf development training but most importantly to improve their health and wellbeing.

The funds donated to One in Five will be used to help fund medical research into mental health. One In Five supports leading Australian mental illness experts at the Florey Institute of Neuroscience and Mental Health and Monash Health.

More information regarding the Bolt Blowers Invitational will be released in coming weeks via www.surfingvic.com

Annual review of the Transport Pillar