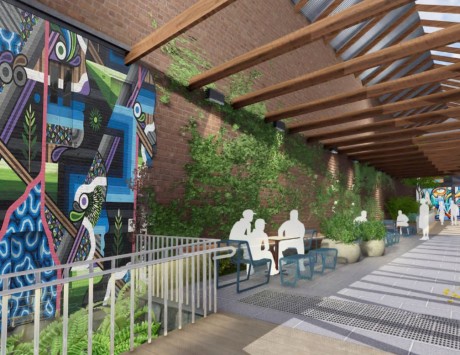 Geelong’s network of laneways will be further expanded with a new pathway set to begin construction next year.

As part of the $370 million Geelong and Great Ocean Road City Deal (City Deal), 28 Malop Street has been purchased with the existing building to be demolished.

The demolition will make-way for construction of a new connecting laneway to better link the Green Spine, the city’s waterfront and the university precinct with Little Malop Street’s thriving shops, food outlets and nightlife via Denny’s Place.

The laneway network overhaul is part of the broader, $38 million Revitalising Central Geelong Project, which is a G21 priority project.

The expansion of the laneway project will bring to life a new part of the city which will support new jobs and improve the local economy for emerging and existing businesses.

It will also breathe new life into Central Geelong, improving accessibility to the city’s growing network of laneways and the businesses that thrive off them.

And it comes at a crucial time. Investments like this one under the City Deal will provide an important economic stimulus.

The City Deal is supporting the continued transformation of the region by leveraging the city’s strengths.

Progress is also underway on the next section of the Green Spine between Gheringhap and Moorabool streets, which will now be delivered in the first quarter of 2021.

The next section will provide a new entry to the city from Johnstone Park and the train station precinct and include a landscaped triangle park that will feature new trees, grass and seating areas as well as improved pedestrian access along the north side of the street.

Preliminary design work on the remaining blocks of the Green Spine that will connect greenery and safe dedicated bike lanes from Bellarine Street all the way through to the Botanic Gardens is also underway.

These projects will provide a welcome economic boost to the region once COVID-19 restrictions start to ease, driving investment into the city, supporting local construction jobs and helping the region bounce back.

More information can be found at www.infrastructure.gov.au/cities/city-deals/geelong.