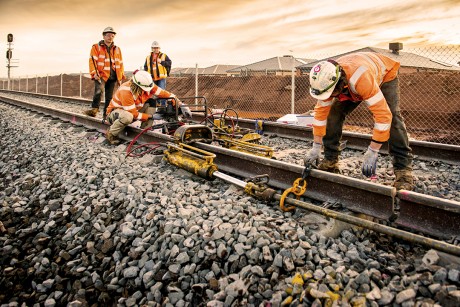 After advocating for this project for the past four years, I am thrilled that the Morrison Liberal Government will deliver another $700 million for the Geelong rail duplication project in tomorrow night’s (2 April 2019) Federal Budget.

This commitment, which builds on the $150 million our government committed to this project in the 2017-18 and 2018-19 Federal Budgets, means Stage 1 and Stage 2 of this project is now fully funded.

Stages 1 and 2 involves the duplication of 12.6 kilometres of track between South Geelong and Waurn Ponds as follows:

Stage 1: construction of second platform and car parking at Waurn Ponds railway station, additional track and a pedestrian link, as well as the preservation of the Armstrong Creek transit corridor.

Stage 2: construction of 12.6 kilometres of track between South Geelong and Waurn Ponds; construction of second platforms and car parking at Marshall and South Geelong rail stations, a new rail bridge over the Barwon River and grade separation of the level crossings at Fyans Street and the Surf Cost Highway.

In what is very exciting news, the Government is also committing a further $4 million to develop a business case for the section of track between the Geelong station and the South Geelong station (Stage 3) through its Major Project Business Case Fund. The 422-metre-long South Geelong Tunnel, which is reaching the end of its useful life, is single track and has a steep grade that limits capacity.

Funding has also been provisioned for future construction works to increase the capacity of this tunnel which will be informed by the business case.

This funding boost represents an incredible investment in rail infrastructure for Geelong and the Corangamite electorate. A dual track and upgraded stations will deliver more frequent and reliable rail services, so important for local residents. I am very proud that we are getting on with the job of delivering critical transport infrastructure to our region.

Labor has been missing in action on local rail infrastructure. Over four years, state Labor delivered just $10 million to the Geelong rail duplication project. It was only after last November’s state election that Labor confirmed it would fund just 20 per cent of the total cost of this project.

Today I call on Labor to expedite its construction timetable and get on with the job of building this dual track and station upgrades.

Why is Labor so against fast rail for Geelong and Corangamite?

The Victorian Government has attempted to muddy the waters by double counting the additional cost of the Morrison Government’s fast rail plan between Geelong and Melbourne. The facts are that the section of track between Sunshine and Southern Cross station is being funded separately as part of the Melbourne Airport Rail Link.

Over a long period of time, State Labor has refused to fix the disastrous Regional Rail Link which is delivering second rate rail services to Geelong and Corangamite commuters. The Victorian Government needs to stop the politicking and deliver the matching funding for fast rail.

The Morrison Government announced on 22 March 2019 that it will invest $2 billion to enable a 32 minute journey from Geelong to Melbourne. The $2 billion would pay for half the estimated cost to complete the track. The state government has also prioritised this line for fast rail, having allocated $50 million for the business case work to be undertaken.

The final section is from Sunshine to Southern Cross. Federal Department of Infrastructure experts estimate will cost $5-6 billion. It would involve tunnelling and the construction of a separate track. However, this section is being built as part of the $10 billion public investment ($5 billion from the commonwealth, and $5 billion from the state) into the Airport Rail.