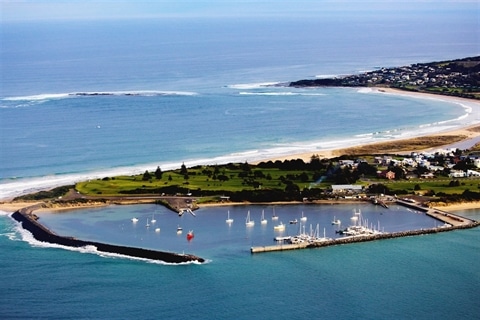 The final plan for Apollo Bay’s harbour precinct was the result of years of community engagement and input, and the transformation will play a key role in the region’s tourism future.

There have been plans and discussion around redeveloping the Apollo Bay Harbour for decades. This development will provide a major boating, recreational and visitor destination for Apollo Bay and the region, whilst protecting the landscape, environment, heritage and authenticity of the harbour.

Key features of the harbour redevelopment include:

The adoption of the Development Plan at last December’s Council Meeting enables Council to start the detailed design and consent processes for the harbour projects.

Before adoption, the draft development plan, which had been created following extensive community consultation and stakeholder involvement, was placed on public exhibition for six weeks (from 26 August 2020).

The adopted development plan responds to 70 submissions, of which 42 were generally supportive and 15 suggested changes, with minor revisions including the reconfiguration of car parking, and clarification of the Fishermen’s Co-op building expansion and car park landscaping.

Colac Otway Shire Council is also developing an Apollo Bay, Skenes Creek and Marengo Community Infrastructure Plan (CIP), which includes the harbour development plan, to guide infrastructure development for the next 20 to 30 years.

The draft CIP report is expected to be presented to Council by mid-2021 and will include consideration of access between the harbour and Apollo Bay township, which was a key issue raised during the Harbour development plan consultation.