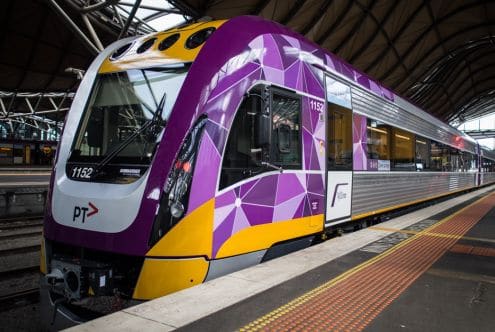 Australia’s first faster rail corridor between Melbourne and Geelong will strip 15 minutes off the travel time and mean a congestion-free commute to and from Melbourne’s CBD.

Trips between Melbourne and Geelong would be slashed to 50 minutes under a $4 billion proposal funded jointly by the state and federal governments.

G21 has long advocated for improved rail services between Geelong and Melbourne to cope with existing and future demand as the region grows rapidly, and it is a key ask under its Regional Rail Connections Priority Project.

Construction of Geelong Fast Rail is expected to be underway from 2023, subject to relevant planning, environmental and government approvals. It will support over 2800 jobs during construction.

The plan will deliver a major boost for the fast-growing city of Geelong where the population is expected to grow by almost 50 per cent in the next 30 years.

The works will include track upgrades between Werribee and Laverton, including a new dedicated express track that will create a faster route for Geelong services.

It is the shortest and most direct rail line between Geelong and Melbourne, approximately 8 kilometres shorter than the current route that travels through the western suburbs via Sunshine.

Running Geelong services on the Werribee corridor also frees up room for more trains to Melbourne’s west, including Wyndham, Melton, Ballarat and Bendigo that run on the Sunshine corridor.

Some Geelong services will continue to run on the existing corridor for increased frequency, choice and the quickest connection with the new Melbourne Airport Rail line.

At this stage, a line and station to service Avalon Airport has not yet been announced. It is important that this is considered in future phases.

The plan builds on more than $1 billion of work already underway to improve services on the Geelong corridor including the Waurn Ponds Station Upgrade, the South Geelong to Waurn Ponds Duplication and Waurn Ponds Stabling.

Both governments will continue to work together on detailed planning and technical investigations to inform a business case for the first stage, as well as scoping future investments for the Geelong corridor which will further reduce travel times.

See a fact sheet on the new Geelong line proposal by clicking here.