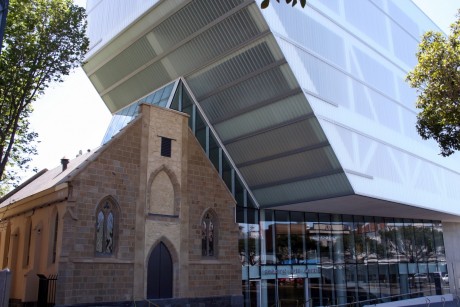 The doors have opened on a new era of creativity at Geelong Arts Centre with the unveiling of its new Ryrie Street building this month.

Delivery of a redeveloped Geelong Arts Centre is a long-term G21 priority under the Cultural Precinct project.

The new building responds to the changing needs of Geelong as a growing city region and Australia’s only UNESCO City of Design, echoing the ‘clever and ‘creative’ strategic direction and driving the region’s creative capability.

The building seamlessly blends the old and new, with a striking translucent facade comprising of over 2,400 square metres of U-Channel glass, revealing a delicately restored heritage church, once hidden from public view behind the former Band of Hope building.

A site-specific light sculpture and projection art installation features within the first level of the arts centre’s Ryrie Street building. The installation responds to changes within the local environment, incorporating biological imagery of significant local ecosystems.

The State Government funded the $38.5 million stage 2 redevelopment along with philanthropic donations.