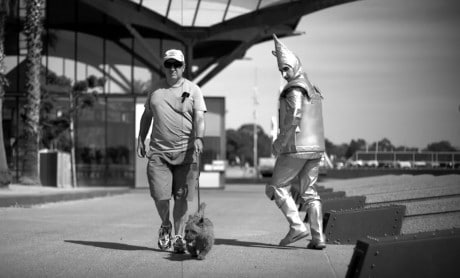 The City Heart project was one of the 10 priority actions of the Central Geelong Action Plan.

A critical component of the project is encouraging members of the community to send in photographs and ideas of how they believe the City Heart should look.

A shop in Moorabool Street has been converted into the City Heart Gallery, which for the next month (until 7 April 2016) will accept and display photographs and ideas from the community.

One of the ways the City of Greater Geelong has tried to engage the community is through the creation of a quirky YouTube clip which sees the Tin Man walking through the deserted streets of Geelong searching for the heart.

The City Heart Project is supported by G21 under the Central Geelong Revitalisation Priority Project within the Planning and Services Pillar.

“Having a vibrant City Heart is essential for the life of the CBD.

“This is the place that our community can gather.  We really want to create somewhere that has a wonderful vibe, full of life and activity.

“A pumping heart and a vibrant economy will take Geelong into the future.

“The silent film, which was shot in January this year, was symbolic of Geelong’s recent history.

“The Tin Man Film is a critical part of generating excitement and discussion about the City Heart and the search to find it.”

For full details of the City Heart Project go to: www.geelongaustralia.com.au/revitalisation/cityheart