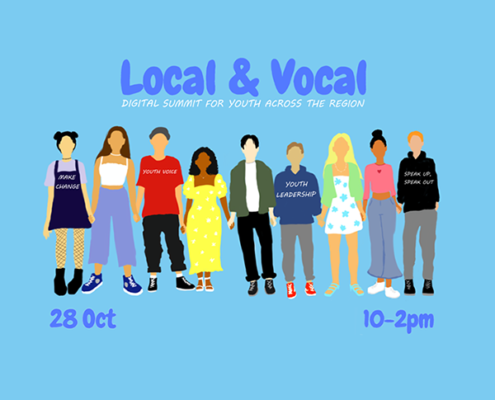 An innovative digital summit for young people, by young people across the #Geelong region will look at ways of breaking down the barriers that cause #loneliness, social #isolation and lack of connectedness.

To be held on 28 October, the ‘Local and Vocal’ summit will include expert speakers, break-out discussions and the opportunity to pitch creative ideas to be implemented within the Geelong regional community.

The direction and outcomes of the “Local and Vocal” summit will be largely determined by young people, for young people.

Summit spokesperson Tyson, 17 years-of-age from the Surf Coast, said the event was expected to be well attended.

“The summit will not only give young people a chance to inject their own ideas into breaking down barriers to social connection, it will be a socialising opportunity in itself. We expect new connections to be forged through the summit.

“We know anecdotally, reinforced by a survey conducted by the Youth Affairs Council Victoria, that the biggest issue for young people is a lack of social interaction.

“Especially now, young people are feeling disconnected and socially isolated from their peers, despite most still being connected online.

“With education significantly disrupted by COVID, and with shutdowns across the hospitality, retail, arts and recreation sectors, young people don’t have the usual opportunities to spend quality time with each other.

“Working in multiple breakout rooms, summit participants will collaborate to develop ideas to breakdown the barriers that lead to loneliness, social isolation and lack of connectedness.

“Following the event, ideas coming from the summit will be individually assessed by a panel including representatives of VicHealth, Headspace, G21, the Department of Health & Human Services and Give Where You Live.

“Potentially up to five projects will be chosen for further development and to be considered for delivery funding.”

Artwork designed for the Summit is by the talented Matilda Kerr, 16, of Colac.

The summit is organised by the five G21 region municipalities, the health and wellbeing arm of G21 – Geelong Region Alliance and the Victorian Department of Health & Human Services.

EMBRACE THE SPACE AND STAY COVID SAFE
Scroll to top