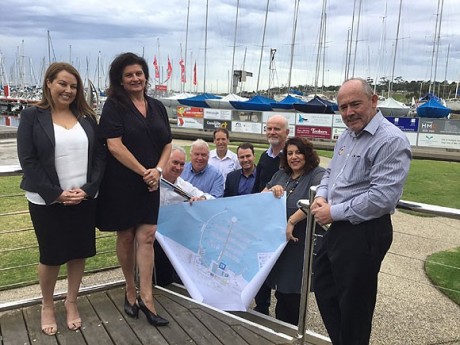 The City of Greater Geelong is well positioned to become the boating capital of Port Phillip Bay and is capable of attracting billions of dollars in economic activity and jobs with a combination of Government and private investment.

A round table of major organisations from Geelong including G21 – Geelong Region Alliance, Committee for Geelong, Geelong Chamber of Commerce, Royal Geelong Yacht Club, Tourism Greater Geelong and The Bellarine, today (28 April 2016) joined the Boating Industry Association of Victoria at the Royal Geelong Yacht Club to attract both the public and private sector  to improve Geelong’s boating and tourism facilities.

The Boating Industry Association of Victoria (BIAV) is backing the call for Federal Government funding for the Geelong Yacht Club Safe Harbour Project, and today said Geelong has all of the natural waterfront advantages as one of the few north facing bays to become the Boating Capital of Port Phillip Bay.

The BIAV believes this project is critical for the development of the region and is a vital part in establishing Corio Bay as a showcase boating hub in Victoria.

The BIAV is also strongly supporting the proposed Underwater Sculpture project  on the Bellarine Peninsula which has not only recognised the extraordinary tourism potential but is also an innovative concept to provide a major educational resource to educate people about the importance of Port Phillip Bay’s environment.

Mr Potts said the projected increase of the population in the central coast area of Victoria, including Port Phillip and Western Port Bays, from 4.6 million to nearly 8 million by 2050, will see a doubling of boating activities which will boost Victoria’s ‘BLUE ECONOMY’.  This provides Geelong and its community with a major opportunity to encourage private investment to create long term and stable employment opportunities in the future.

“On current numbers this would see the number of recreational water craft in Victoria jump to 344,000, and if there are no changes in trends, 95% of the 344,000 Victorian recreation vessels would be trailered, less than 8 metres in length with 68% of registered boats being operated on Port Phillip and Western Port Bays.,” Mr Potts said.

“One also needs to consider the dramatic increase in population in the western suburbs of Melbourne and regional areas with a major lack of access to water locally making Geelong as a more convenient  place to launch their boat.

“Given the fact that some current boating facilities around the Bay are not coping in the boating season, the future funding for the expansion of facilities to provide access to water and support the Victorian tourism industry is well beyond the capacity of all levels of Government without the support and partnership of the private sector.

“Not only are  local councils and the Victorian Government faced with providing new facilities but there is a major backlog of ageing coastal infrastructure such as piers and the expensive cost of regular dredging to maintain access to water.”

Mr Potts said the recent opening of Balmoral Quay and the Marina in Geelong and the release of the plans for the $5.2 million Nelson Cove project at Moolap Geelong, a 4000 berth residential marina project expected to generate around $20 billion of economic activity and create thousands of jobs, are good examples of how the private sector can fund the Blue Infrastructure to cope with current and future demands on the use of Port Phillip and Western Port Bays.

“The recent opening of the privately funded Wyndham Harbour residential marina development, which will provide a vital safe harbour for boats between Geelong and Melbourne together with a terminal, is another outstanding example of the contribution to the Blue Infrastructure of Port Philip Bay and will also benefit Geelong.

“The expansion of boating facilities in the City of Geelong could provide in the longer term a strong commercial argument for the establishment of a ‘Marine Centre of Excellence’ for both the development of new technology, product development and training, which could be seen as part of a long term transition from the car industry.”

The BIAV believes that there needs to be a major change in the way in which both Port Phillip and Western Port Bays are managed and, more importantly,  how their operation,  protection and preservation for future generations is adequately funded.

Industry, and the economies of major regional cities such as Geelong, and many Local Government economies.

In partnership with Tourism Greater Geelong and The Bellarine, the Boating Industry Association of Victoria recently supported the highly innovative proposal to establish an Underwater Sculpture Gallery on the northern shore of the Bellarine Peninsula near Clifton Springs.  For a relatively small investment of $2 million from government this outstanding opportunity could boost local and international visitation, deliver jobs, economic activity and a world standard visitor experience.

The combination of arts, education, environment and tourism make this project a compelling priority for the Blue Infrastructure Fund and we call on Governments at all levels to support this unique opportunity.

The Boating Industry of Victoria believes it is inevitable that a Victorian Blue Infrastructure Fund will be established for Port Phillip and Western Port Bays given the importance the Victorian Government places on healthy Natural Capital in its own review  of the environment.

Source: A joint media release from the Boating Industry Association of Victoria and Tourism Greater Geelong and the Bellarine