HUNDREDS OF NEW JOBS ON THEIR WAY TO GEELONG 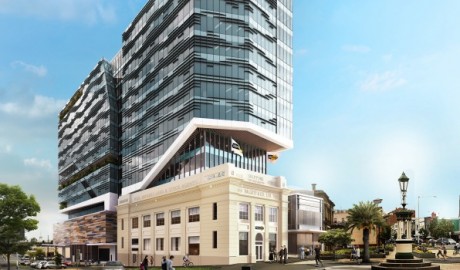 Hundreds of new jobs are on their way to Geelong as work begins the week (w/c 9 May, 2016) to build WorkSafe Victoria’s new headquarters.

Minister for Finance Robin Scott and Member for Geelong Christine Couzens visited the site of the $120 million project with representatives from developer Quintessential Equity.

Empty buildings at the rear of the site will be demolished, while work will get under way to build an internal structural system to support and protect the facade of the historic Dalgety & Co building during construction.

Piling and other foundation works will begin later this month.

WorkSafe’s move to Geelong is part of the State Government’s work to bring new jobs and industries to the region.

More than 150 WorkSafe employees will move to Geelong in December and work out of the TAC head office at 60 Brougham St.

The rest of head office is expected to move in 2018 when the development is complete.

Minister for Finance Robin Scott said, “We’re a step closer to breathing more life into Geelong by bringing hundreds of new jobs and transforming the CBD. The new headquarters will be a powerful symbol of renewal and help make sure we continue to grow Geelong into a national hub of injury prevention.”

Member for Geelong Christine Couzens said, “This is an important milestone for Geelong. We’re another step closer to welcoming more than seven hundred jobs to our great city. Avalon’s future is safe, the WorkSafe headquarters is coming – we’re putting planes and cranes in the sky for Geelong.”