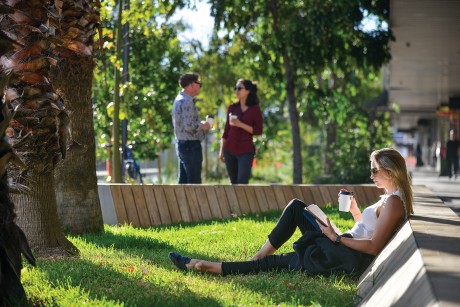 The Malop Street Green Spine project is receiving high praise across the country.

The joint local-state government initiative was a winner in the Civic Landscape category of the 2019 Australian Institute of Landscape Architecture National Awards.

It is a key project in the 10-year Revitalising Central Geelong Action Plan, implementation of which is a G21 Priority Project.

The Green Spine was described as a “shining example of how traditional retail streets can become inviting public spaces during the day and at night” by the voting jury.

The jury celebrated the project’s inclusion of intimate spaces not often seen in streetscape design and commended its water-sensitive urban design measures.

The national honour follows the project’s win at the Victorian section of the awards in June.

The flagship project of the Revitalising Central Geelong partnership program, the Green Spine will make the community’s long-held vision for a linear park running through Central Geelong a reality.

The green spine project has been funded by all three tiers of government to be developed one block at a time along the six blocks of Malop Street. It will provide a botanical link between the city’s two existing green spaces, Johnstone Park and Eastern Gardens.