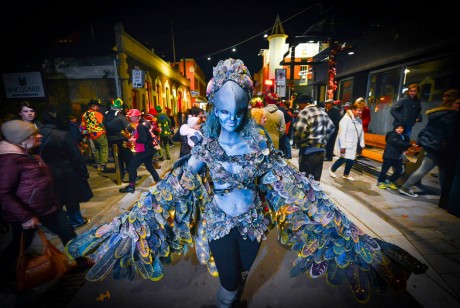 When the sun goes down on Friday 3 May, the streets of central Geelong will be transformed for the return of After Dark.

This year’s theme Heighten Your Senses is an invitation for you to surrender to and embrace the unknown.

Artists have created artworks exploring sight, hearing, taste, touch, smell, and even our sixth sense – intuition, to inspire and engage us.

Now in its fifth year, After Dark will convert the city with interactive art, street performances, installations, music, exhibitions and projections.

Think of central Geelong as a blank canvas where artists will show you new ways to experience the existing spaces, buildings and laneways, reminding us that culture and creativity is the heartbeat of our community.

Last year’s event saw 20,000 people drawn into central Geelong, highlighting our community’s eagerness to embrace our clever and creative side.

Geelong After Dark is one of the many hallmark events that clearly demonstrates why Geelong is Australia’s only designated UNESCO City of Design.