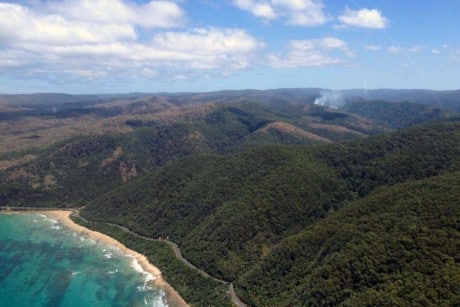 Colac Otway Shire has approved a $405,000 rates relief package in response to the Christmas Day bushfires along the coast.

The Council will waive all 2015-16 rates for 116 developed properties that were destroyed by the fire in Wye River and Separation Creek.

In addition, properties that are identified as having restricted access will be eligible for rates waivers or discounts. The waiver will automatically apply to owner-occupied homes, while holiday rental or holiday homes will receive the waiver if access to their property remained restricted after 20 January, 2016.

“This rates waiver is an acknowledgement of the financial and emotional impact this fire has had on our coastal communities,” he said.

“This Council will strongly support our community through the recovery and rebuilding process, and our rates relief package is an important part of that.”

As part of the rates relief package adopted by Council at a special meeting in Apollo Bay, all Wye River and Separation Creek property owners with rates payable will receive an interest-free extension to 30 June, 2016.

In addition, Cr Buchanan said Council had updated its hardship policies to make it simpler for people to lodge hardship requests.

“Council has advocated strongly to the State Government asking for a waiver of the Fire Services Levy, which Council has a legislated responsibility to charge through our rates notices.

“We’re pleased to confirm that we have had advice that the State Government will support this request and will waive the Fire Services Levy for the 2015-16 year.”

Cr Buchanan said the rates relief package had resulted in a budget shortfall of $405,000 or 1.7 per cent of Council’s budget.

The package will be funded with $200,000 put aside for Council’s unsuccessful bid to the Federal Government for the Colac CBD and Entrances Project, and $205,000 from operational savings. Another $20,000 will be put aside in operational savings to offset a reduction in interest revenue.

“Council has written to the Premier Daniel Andrews informing him of the significant cost of not only the rates waiver, but the ongoing impact on Council’s budget arising from the level of destruction in Wye River and Separation Creek,” Cr Buchanan said.

“Preliminary estimates indicate the valuation change will be in the vicinity of $50 million, translating to a cumulative budget shortfall of $2 million over 10 years.

“Rate capping, combined with the fact that Colac Otway is a shire of significant socio-economic disadvantage means that Council doesn’t have the ability to replace $2 million in lost revenue.

“We’ve called on the Premier to provide $2 million of urgent funding support to replace this lost revenue.”

Council will automatically apply the rates and charges waiver to eligible properties, and contact all affected ratepayers in the high impact zone on an individual basis.

Ratepayers are welcome to contact Council to ascertain their individual status by calling (03) 5232 9400. In addition to Council’s regular customer service arrangements there will be additional Council staff located in Wye River over the coming weeks to assist residents to understand how their properties are affected.

$9M TO SUPPORT VICTORIAN APPRENTICES AND TRAINEES
Scroll to top