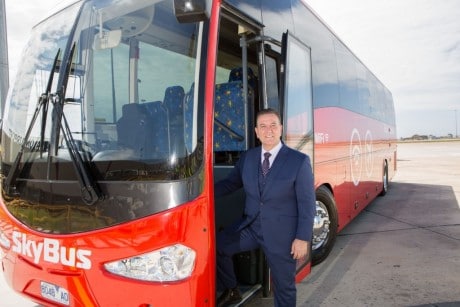 A new SkyBus service will run between Melbourne’s CBD and Avalon, making it quicker, easier and cheaper to get to the growing airport.

Minister for Tourism and Major Events, and Member for Lara, John Eren joined the SkyBus operators on the tarmac today to announce the new service.

It’s another great win for Avalon Airport, just one year after the State Government secured its long-term future.

Thanks to the State Government, Avalon Airport now offers Jetstar services to Hobart, Adelaide, Sydney and the Gold Coast.

There are now more than 900,000 seats to and from the Airport each year. That’s  great for locals who work at the Airport and the entire region, which welcomes thousands of new visitors each year.

In just two years, the State Government has secured an additional 173,000 aeroplane seats for Victoria, which has an estimated economic impact of between $386 million and $575 million.

Minister for Tourism and Major Events and Member for Lara John Eren says, “Since we saved Avalon Airport it’s gone from strength to strength.

“This is fabulous news for the Airport and the local community. SkyBus’ decision to extend its services to Avalon Airport is a vote of confidence in the region and the Airport. Avalon is a gateway to some of  our most prized tourist destinations.

“A busier Avalon Airport means visitors from around Australia coming to Victoria to see the best of everything we offer.”