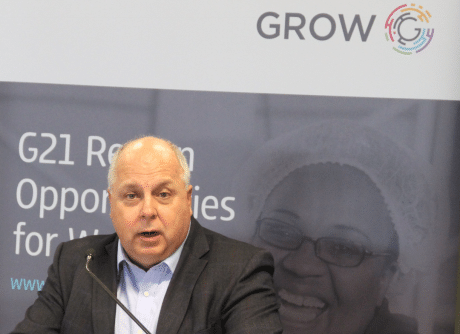 The State Government is getting on with creating jobs in Geelong by investing $1 million in the G21 Region Opportunities for Work (GROW) project.

With this funding, the State Government is helping tackle joblessness in key locations in the G21 region – Corio, Norlane, Whittington and Colac.

By the end of the first five years of the project the expected benefits are up to:

The GROW project has been developed by Give Where You Live Foundation in partnership with the G21 Geelong Region Alliance in response to employment challenges facing these locations.

GROW guides the efforts of numerous stakeholders working together to create new jobs and investment opportunities. The project deals with the known correlation between unemployment and disadvantage.

The government’s $1 million investment will support the initial start-up and ramp-up phases of the ten year GROW project.

This funding builds on the State Government’s recent $3 million investment to support a state-of-the-art manufacturing hub in Geelong, which will also support jobs and stimulate local commercial enterprise.

“Our $1 million investment in the GROW project shows how Labor is getting on with supporting Geelong during a period of transition and tackling disadvantage in areas that need it most.”

The Minster for Regional Development Jaala Pulford said: “The Victorian Government is focused on building stronger regional communities and creating more regional jobs, and the boost to the GROW project will help deliver on that.”

The Member for Geelong Christine Couzens said: “This is a great boost for GROW and an exciting and innovative approach that will support people into real jobs in Whittington, Norlane, Corio and Colac.”

The project is based on significant international evidence that the best way to reduce areas of persistent disadvantage in a community is to reduce unemployment in those areas.

Give Where You Live CEO Bill Mithen said the state government’s announcement was an important show of confidence in GROW.

“Addressing disadvantage is among the most important objectives any community can have as it works to evolve and grow economically.  We can’t afford to leave sections of our community behind,” Mr Mithen said.

“Today the state government has recognised the significant role GROW is playing to address disadvantage across the G21 region.”

G21 CEO Elaine Carbines said the state government had shown foresight in its support of GROW.

“The state government has recognised the innovative nature of GROW and provided in-principle support right from the project’s inception,” Ms Carbines said.

“However, today’s funding announcement is crucially important as it provides the tangible support that GROW needs to succeed.

“We now have funding support from Give Where You Live Foundation, the Alcoa Foundation, G21 and the state government.

“We have this week been in Canberra encouraging the federal government to also financially back this important project.  We’re hopeful of positive news from Canberra, because addressing disadvantage is everybody’s business.”

Mr Mithen said the state government grant would help ensure that key elements of the GROW strategic plan could be implemented.

“The GROW strategy is reliant on a number of interlinked elements.  Today’s announcement means we can confidently begin work on a number of key elements,” Mr Mithen said.

GROW is supporting organisations in the G21 region to understand the value of choosing local suppliers, products and services, helping create new jobs which can potentially employ people from target areas.

GROW will also link jobs and jobseekers through ‘demand-led employment brokerage’ providing incentives for the employment of suitably trained people from target areas.

Other steps to implement the GROW project across the G21 region can be found on the GROW website: www.grow.g21.com.au

Source: Media releases from the state government and from GROW