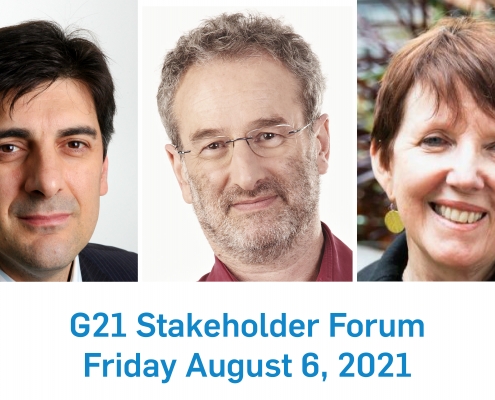 Due to the evolving COVID situation, G21’s annual stakeholder forum will pivot to a virtual video-streamed free event on the date a face-to-face forum had been planned, Friday 6 August (9.30 am – 12 noon).

The same stellar line-up of speakers will be taking part in a thought-provoking discussion on how the G21 region can manage its fast-growing population while remaining one of Australia’s most liveable regions.

The forum will also be live on 94.7 The Pulse with broadcast host Mitchell Dye.

G21 CEO Giulia Baggio said while it was disappointing the forum will not go ahead face-to-face the virtual forum will be just as compelling and entertaining in a shorter format hosted by former ABC broadcaster Jon Faine.

“Last year’s forum was also virtual due to COVID and proved a great success. I’m confident this year’s forum will be just as thought-provoking,” Ms Baggio said.

“Some of Australia’s most interesting speakers will be sharing their insights on the region’s social and economic future.

“They’ll be discussing the importance of creating connected, equitable, sustainable communities and the need to put people at the centre of our thinking,” Ms Baggio said.

People wishing to register for the FREE live video-stream forum on Friday 6 August (9.30 am – 12.00 noon) should go to eventbrite.com.au.

A streaming link, program and other details will be emailed prior to the event.

People who had already registered and paid for the face-to-face forum at Torquay RACV Resort do not need to re-register.  You will automatically be registered for the virtual streaming forum.

If you haven’t already, you will also receive a full refund of your ticket price to the card or bank account from which you paid for your tickets.  This refund is automatic – you don’t need to apply.

The forum is brought to you by our valued forum sponsors:

About our Master of Ceremonies:

Jon Faine AM is known for his provocative and probing interview style, quick wit and willingness to ask the hard questions.  As the long-time morning show host on ABC Radio Melbourne he was a self-described “thinking person’s shock jock”, delivering one of the most thought-provoking radio programs in Australia.  With a professional background in law, Jon previously produced and presented Radio National’s Law Report, worked on ABC TV’s Investigators and has been a scriptwriter for several TV and feature ﬁlms.

George Megalogenis is an author and journalist who has observed national politics and demographic changes in Australia for more than three decades for The Australian, the ABC and The Age.  He has just penned the latest Quarterly Essay: Exit Strategy – Politics After the Pandemic.

George is also the author of ﬁve books, including The Australian Moment which won the 2013 Prime Minister’s Literary Award for Non-ﬁction and the 2012 Walkley Award for Non-ﬁction, and formed the basis for his three-part ABC documentary series Making Australia Great.  George’s other books are Faultlines, The Longest Decade, Australia’s Second Chance, The Football Solution and Balancing Act.

Distinguished Professor Billie Giles-Corti is a VC Professorial Fellow at RMIT University and leads the Healthy Liveable Cites Group in the Centre for Urban Research. For more than two decades, she has studied the impact of the built environment on health and wellbeing and led thought-provoking discussion on the features of the “20 minute neighbourhood”.

Professor Giles-Corti has led the National Health and Medical Research Council (NHMRC) Centre of Research Excellence in Healthy Liveable Communities, was RMIT’s Urban Futures Enabling Capability Development Platform Director and Foundation Director of UWA’s Centre for the Built Environment. She is a Technical Advisor of the Victorian Oﬃce of the Government Architect’s Design Review Panel, a member of the Victorian Planning Authority’s Precinct Structure Plan Review Committee, a member of Melbourne Water’s Liveability Panel and an Honorary Fellow of both the Planning Institute of Australia and the Public Health Association.

Corrina Eccles is a Wadawurrung woman.  She is a direct descendant of Queen Mary Robinson and the granddaughter of Aunty Joyce Eccles.  Her grandmother is 96 years-of-age; the oldest living elder of the Wadawurrung people.  Corrina herself has two sons and two granddaughters.  Her family has five generations living on Wadawurrung country.  Corrina currently works at Wadawurrung Traditional Owners Aboriginal Corporation.

Corrina’s Nan’s connection to ‘spirit, culture community’ connected Corrina to the Wathaurong community in the region at a young age.  Corrina’s Nan was a founder of Wadawurrung Traditional Owners Aboriginal Corporation.  Her journey and connection continued through being guided by strong Elders and respected men and women in family and community.  Corrina is a respected advocate and leader in the community with a passion of supporting Aboriginal children and young people to connect with Culture to grow strong with their identity, to know who they are and where they belong.

Angela worked on the Government’s response to the GFC as the then Australian Finance Minister’s Deputy Chief of Staff and on major reforms across the health, education and disability sectors.  She started her career as an economist at Australia’s Department of Prime Minister and Cabinet and has worked across tax, fiscal and social policy.

As Lead Economist at Equity Economics, Angela has authored a number of major reports including Supporting Economic Recovery in NSW: Investment in Social and Affordable Housing is Critical to Supporting Jobs Today and Families into the Future (2020) and Gender Based Impacts of Covid-19 (2020).

Angela is also a non-executive Board Member and Finance Committee Chair of Royal Melbourne Hospital; a board member of GenVIc; a member of the Victorian National Heart Foundation Advisory Board; and Deputy Chair of the Women in Economics Network.

Breathe were the instigators of The Commons housing project in Brunswick and now are collaborating with other Melbourne Architects to deliver the Nightingale Model. Nightingale is intended to be an open source housing model led by Architects.

Jeremy believes that architects, through collaboration, can drive real, positive change in the city they call home.

Nat Anson is an innovative strategic planner with extensive experience in master planning across Melbourne’s growth corridors and Victoria’s regional cities and towns.

A Geelong local, Nat leads Urbis’ Victorian expansion into the Geelong region and South West of Victoria. He is passionate about creating growth and economic development opportunities in regional cities and environments and specialises in stakeholder engagement – strengthening collaboration between the public and private sectors.

Prior to joining Urbis, Nat held senior management positions in strategic planning departments at state and local government including the Victorian Planning Authority.

Nat’s most recent experience at the City of Greater Geelong had him leading the delivery of the largest master planning project ever undertaken in Regional Victoria – the Northern and Western Geelong Growth Areas Framework Plan.