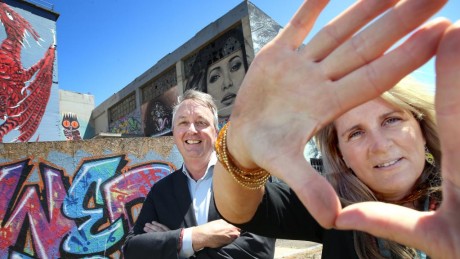 Victoria’s Minister for Creative Industries Martin Foley and Member for Geelong Christine Couzens today (25 January 2017) met with the #VacantGeelong team and announced a $35,000 grant for the project through the Victoria Government’s VicArts Grants program.

#VacantGeelong will see artists working onsite in the former factories in the coming months, and collaborating with past employees, community members and Deakin University students to create artworks that reflect on the rich history of the area.

It will culminate in a public exhibition for people to view the artworks, explore inside the former factories and learn more about the suburb’s history.

Also in the region, Barwon Heads Festival of the Sea has received a $5,200 VicArts grant to deliver a series of art workshops for people affected by a chronic illness or disability. The workshops will lead to a group exhibition in Barwon Heads in March.

These projects are among 87 across the state – ranging from the creation of new performances and novels to exhibitions and podcasts – to share in more than $1.8 million in the latest round of arts grants.

In total, the projects will provide job and career development opportunities to more than 2,700 Victorian artists.

The VicArts Grants program provides grants of between $5,000 and $75,000 to support the development and presentation of new creative works as well as interstate and international touring and community-based projects.

Applications for the next round of VicArts Grants close 23 February. For program details, and to see a full list of the latest VicArts Grants recipients, visit www.creative.vic.gov.au

Minister for Creative Industries Martin Foley: “We’re proud to back our local talent and support activities that make the best art and creative experiences accessible to all Victorians – right here in Geelong and across the state.”

Member for Geelong Christine Couzens: “#VacantGeelong will transform a precinct that was once a hive of industry by reimagining it as a new community space. It will be wonderful for local artists and families alike.”