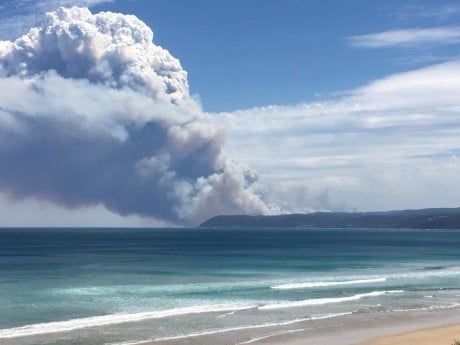 The State Government has accepted all recommendations made by the Inspector General for Emergency Management into the Wye River fire on Christmas Day.

The IGEM report, released today (25 February 2016), included Mr Tony Pearce’s key findings from his investigation into the fire which destroyed 116 houses in Wye River and Separation Creek on 25 December 2015.

The report found that the appropriate level of resources were allocated to implement the initial attack strategy and proper consideration was given to the fire, terrain and safety of firefighters.

IGEM supported the decision making process and implementation of the fire control strategies to reduce risk to the communities.

Mr Pearce also found community information and warnings were issued and the evacuation was well planned and successfully executed.

IGEM reported that the fire that jumped containment lines and burnt through Wye River and Separation Creek likely originated from the lightning strike area.

The Inspector General also made four recommendations on areas for improvement:

After receiving the IGEM’s report, the Government requested Emergency Management Victoria (EMV) to work with all agencies on how the recommendations would be implemented.

EMV is well advanced in designing a system which has been piloted between agencies and at local government level. It will provide a more accurate overview of the location and number of resources involved in multi-agency responses to major emergencies.

The ‘common operating picture’ will be implemented in time for the 2016/17 summer season which will share information to improve timely decision making.

The Commissioner, Craig Lapsley, will also ensure the State Response Controller and Regional Controllers actively oversee the initial assessment of incidents and monitor the potential need to escalate them from a Level 2 to Level 3 incident.

The IGEM is an independent statutory body established under the Emergency Management Act who provides recommendations about how we manage emergencies in Victoria into the future.

The IGEM’s report has been provided to the Coroner.

The Minister for Emergency Services Jane Garrett said: “Firefighters did an extraordinary job over 34 days to contain this fire and it is a testament to them that not a single life was lost.”

“This report is another step in the continuous improvement of how agencies work together to respond to emergencies in Victoria.”

The Minister for Environment Lisa Neville said: “More than 1000 of our forest firefighters and staff worked on this fire and I want to thank them for their tremendous efforts and for sharing their expert knowledge with the Inspector General.”