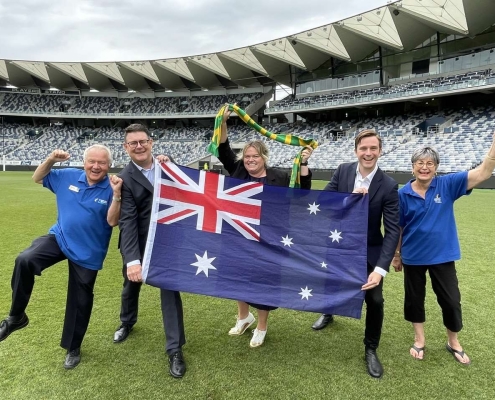 Geelong has been officially confirmed as one of four regional hubs for the 2026 Commonwealth Games, with the state’s regions set to shine on the world stage.

In addition, Geelong will also host aquatics, para swimming, beach volleyball, gymnastics, hockey, table tennis, para table tennis, triathlon and para triathlon, with the venues for each sport to be determined as part of the Games’ final sport program.

A process to assess what further infrastructure upgrades will be required to host these events as part of the 2026 Commonwealth Games has commenced.

Victoria 2026 will deliver significant economic and social benefits to the Geelong region, including housing and world-class sports facilities. With up to 2,950 athletes and officials set to be housed in Geelong’s athlete village, the region will benefit longer term from more affordable housing following the Games.

Currently, the G21 region needs enormous investment in infrastructure to keep pace with the incredible growth we are ­experiencing.

Housing, initially for athletes, sporting facilities, ­improved transport networks are all urgently needed and the Commonwealth Games would provide the impetus to quickly get on with this work.

An athletes’ village or vill­ages would provide a brilliant opportunity to build affordable and key worker housing in central Geelong and around the region.

We currently have a severe housing shortage, which is one of our biggest economic and social challenges.

An athletes’ village could be converted to meet Geelong’s ambition to have 12,000 more residents living in the CBD.

Geelong is also expected to benefit greatly from the influx of visitors and sporting fans travelling to watch the Games be played at Kardinia Park and other venues across the region.