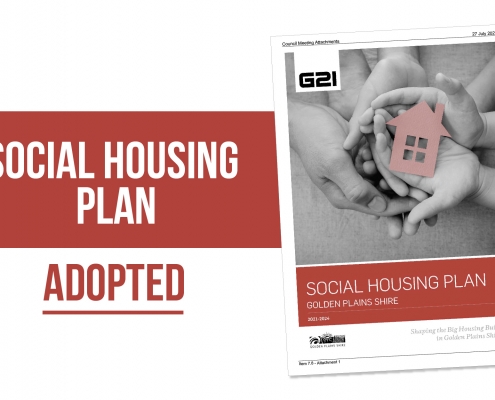 Golden Plains Shire Council recently (27 July) adopted the Golden Plains Social Housing Plan to work with the Victorian Government on addressing the lack of social housing in the municipality.

As part of its participation in a regional Social Housing Planning project facilitated by the G21 – Geelong Region Alliance, the Golden Plains Social Housing Plan has been developed to sit alongside similar plans for each G21 council and a combined regional plan.

In Golden Plains Shire, there are currently only eight social housing properties and there is unmet demand for an additional 113 homes. Unmet demand statewide has been recognised by the Victorian Government through its $5.3 billion Big Housing Build to build thousands of new dwellings and update existing social housing across the state, including a $15 million guaranteed minimum spend in Golden Plains Shire.

The Golden Plains plan outlines the need for more subsidised social housing properties and provides local information and perspectives to help shape the Government’s $15 million commitment and support Council to work constructively with the government, developers and housing providers to increase access to local social housing.

The plan commits Council to working with these partners on identifying, assessing and developing underutilised state- and Council-owned land, as well as where developers can include provision for social housing in greenfield sites. Council will maintain a public register of opportunities, and undertake a rigorous planning, assessment and consultation process before finalising proposals on Council-owned land.

With renewed government interest in tackling the lack of social housing across the state, Mayor Cr Helena Kirby says Council was pleased to adopt the plan following participation in the G21’s regional social housing project.

“The data shows we have higher rates of rental stress in and around Bannockburn and Smythesdale and a startling gap between the current supply and demand for social housing in our Shire.

The G21-facilitated project was funded by philanthropic grants from the Percy Baxter Trust and the Anthony Costa Foundation.

The Golden Plains Social Housing Plan is available on Council’s website at: goldenplains.vic.gov.au/strategies.