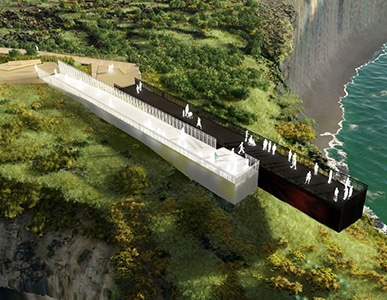 Work has begun on a new lookout at the Twelve Apostles, part of stage one works in the Shipwreck Coast Master Plan implementation.

The Victorian government will begin construction on the $9.2 million lookout, which will provide a safer and more accessible experience for visitors and help to future-proof the iconic destination.

Situated on Kirrae Wurrung Country, the two “clapsticks” of the structure are the colours of Ngayook (Sulphur Crested Cockatoo) and Ponponpoorramook (Red Tailed Black Cockatoo), which are primary totemic species to the Eastern Maar peoples.

The project will be the second delivered as part of the government’s $16.5 million investment in the Shipwreck Coast Master Plan (stage one). The first, a new pedestrian suspension bridge connecting the Port Campbell National Park with Port Campbell, was completed last year.

Stage one projects are expected to support 120 ongoing jobs, add $12 million to the regional economy and increase the annual visitor spend by $14 million.

G21 is a long-time advocate for improved facilities along the Great Ocean Road, including upgrades to the Shipwreck Coast, as part of its Visitor Economy priority project. The lookout will open in 2023.