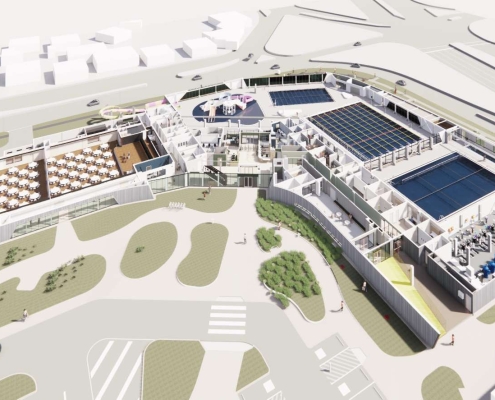 The Northern Aquatic and Community Hub will to be powered by renewable energy, slashing carbon emissions and delivering substantial operational savings.

The City of Greater Geelong will invest $4 million to convert the Norlane hub site from gas to electricity. The existing aquatic facilities in Waterworld are run on gas.

Switching to electricity in the new Northern Aquatic and Community Hub – allowing it to be powered by wind energy – would deliver an estimated $150,000 per year in operational savings.

It would also cut emissions by about 1700 tonnes per year, and help the new facility achieve a 5 Star (Australian Excellence) Green Star rating.

The emissions reduction is equivalent to the annual energy use of more than 300 Victorian households.

Construction of the transformative Northern Aquatic and Community Hub is underway, and the project is a long-term G21 priority under its Addressing Disadvantage project.

Building A Masterplan For The Barwon River

What has been committed?
Scroll to top