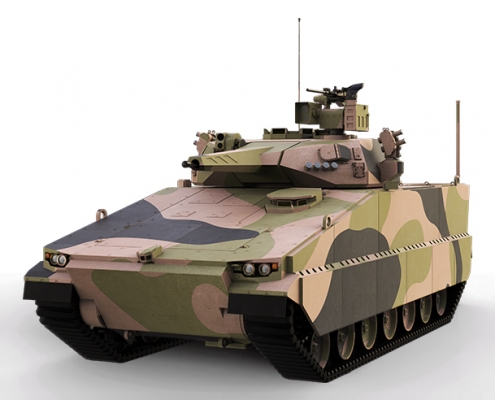 The State Government is backing Hanwha Defense Australia to build and maintain Australian military vehicles in Geelong, in a move that stands to create hundreds of highly-skilled local jobs.

Minister for Industry Support and Recovery Martin Pakula today (12 Jan 2021) signed a Memorandum of Understanding with Hanwha, a major South Korean global company, to formalise a long-term partnership which will support the establishment of Hanwha’s defence manufacturing operations in Victoria.

Minister Pakula was at Laverton North to see Hanwha’s LAND 400 Phase 3 vehicle the Redback (see image), after the Commonwealth selected Hanwha as one of two final tenderers, along with Rheinmetall in Queensland.

Hanwha is also looking to build 30 Self-Propelled Howitzers and 15 armoured resupply vehicles in Geelong, and carry out maintenance and repairs during their years of service for the Australian Army, having been recently announced as the sole tenderer for the Commonwealth’s LAND 8116 tender.

The MoU will enable the Government and Hanwha to explore investment opportunities in defence and non-defence sectors. The partnership will strengthen Victoria’s relationship with South Korean industry, driving collaboration and creating opportunities for expanded bilateral trade and investment.

Victoria is well positioned to capitalise on the Commonwealth’s forecast investment in new defence capability of $270 billion over 10 years.

The Victorian Budget 2020-21 allocated $6 million to give the state’s defence sector a competitive edge so it can capture a large share of Australia’s biggest ever defence spend.

“Victoria is the home of Australian manufacturing and we are pleased to be working with Hanwha to maximise opportunities for more high-value jobs to be created in Geelong,” Minister Pakula said.

“The range of companies working in defence industries is staggering, and we’re backing them to grow further.”

Hanwha Defense Australia managing director Richard Cho said his company was delighted to enter into this MoU with the Victorian Government.

“We see it as a strong platform from which to develop our mutual interests in a range of technologies and to establish an advanced manufacturing facility here in Victoria,” he said.