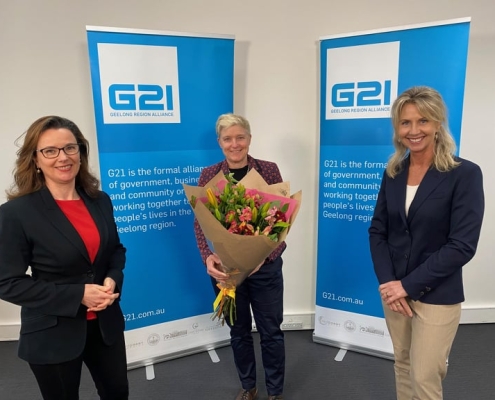 CEO Giulia Baggio reflected on her first year in the role, noting that when she started in February, people were looking forward to 2021, believing the covid pandemic to be over and that our world would regain some sense of normality.

While that sunny outlook didn’t quite eventuate, and Victorians were consigned to another disrupted year, G21 got on with the enormous effort over a six month period of creating refreshed Priority Projects for 2022 and beyond.

Giulia spoke about how growing well, rather than just growing, would determine our future liveability, particularly considering that the pandemic has turbo-charged an extraordinary rate of population growth, with thousands of new residents to the region in the last 18 months.

She spoke about how the COVID lockdowns had revealed inequities and weaknesses in our region, including social disconnection, a gender imbalance, unaffordable housing, labour shortages and poor digital coverage.

As a result, the G21 Board and pillar leaders took the first steps towards mapping a refreshed direction for the years ahead, identifying new areas of opportunity and emerging roadblocks, and solidifying long-term goals to guide immediate priorities.

This refreshed vision will play a crucial part in G21’s advocacy in 2022, when we will outline the region’s priority projects to an attentive audience in the lead up to both federal and state elections.

A highlight of the evening was keynote speaker Tracey Slatter, Managing Director of Barwon Water who spoke about how as a society we underestimate the importance of access to water.

When she started at Barwon Water five years ago, she was challenged to address two of the most significant issues our region faces, climate change and the equity divide.

Under her leadership, Barwon Water has developed and launched Strategy 2030, marking a paradigm shift for the organisation from utility provider to an enabler of regional prosperity and sustainability.

Planning is underway for a new 50-year strategy “Water for our Future” which will aim to keep water accessible and affordable as our climate becomes drier.

Barwon Water has also pioneered the Renewable Organics Network, an innovative waste system that will transform food, garden and commercial organic waste into clean energy and soil fertiliser in a big step forward for the circular economy in Victoria.

The organisation is also working to address the equity divide in our region, providing employment for people facing challenges through their traineeship program, and placing significant value on creating a diverse and inclusive work environment.

We welcome new Board Director Melissa Stephens (General Manager Organisational Performance at Barwon Water) and congratulate Rowena Clift (CEO at Western Victoria Primary Health Network) and Brett Winter (CEO at GeelongPort) on their re-election to the G21 Board. All will serve a two-year term.