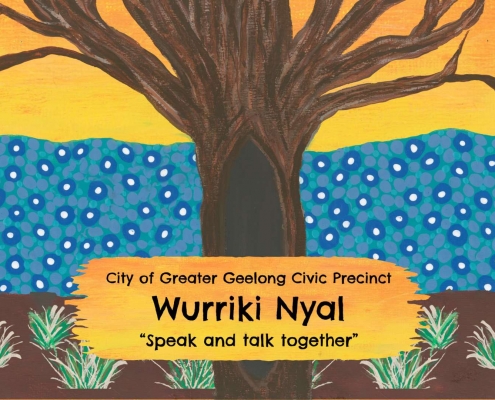 The City of Greater Geelong’s (CoGG) new Civic Precinct, including offices and surrounding community space, will be known as ‘Wurriki Nyal’ (WUU-ruh-kih nee-YAHL), Wadawurrung words meaning ‘speak and talk together’.

Developer partner Quintessential Equity has also announced the name of the precinct’s proposed second building will be ‘Ngytan Koriayo’ (nee-YAHT-ern kohr-ri-AY-yoh), which means ‘look over the water, see all around Corio Bay’, highlighting the building’s views for visitors and staff.

The names come from Wadawurrung language, the original language of the lands, waters, seas and skies that now include the City of Greater Geelong, paying tribute to the rich Aboriginal culture and history of the region.

CoGG and Quintessential Equity have worked closely with Wadawurrung Traditional Owners in being granted this special use of Wadawurrung language.

Wadawurrung People built structured circles, sometimes referred to as yarning circles, on country as places of ceremonial business, gathering and celebration. In acknowledgement of this tradition, the precinct will incorporate a yarning circle at the heart of its new public space, with the Wadawurrung name ‘Gayoopanyoon Goopma’ (gye-OO-pahn-yoon GOOP-mah), meaning ’gather’.

CoGG and Quintessential Equity have also released an educational video featuring artwork by Wadawurrung man, Billy-Jay O’Toole, and animated by local Geelong studio Pillowfort Creative. The video explores the meaning and significance of each name and outlines their pronunciation.

The CoGG offices and the precinct’s new community space are expected to be completed by mid 2022.