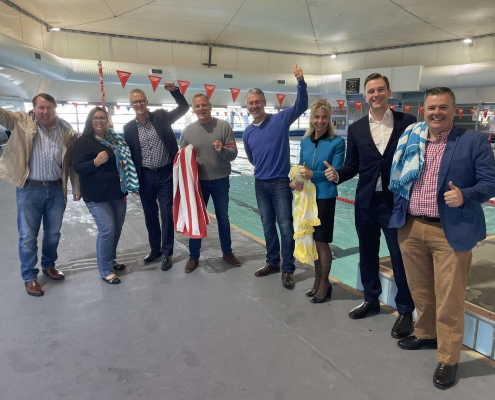 The City of Greater Geelong (COGG) will increase its funding commitment to the Northern Aquatic and Community Hub by a further $21.84 million in a bid to secure vital federal government funding and bring the $61 million facility to life.

For CoGG’s $10 million application under the federal government’s Building Better Regions Fund (BBRF) to be eligible, the project must be fully funded and ready for construction to begin.

Should the $10 million application to the Building Better Regions Fund prove successful, COGG’s total commitment would reduce to $34.84 million.

COGG’s decision to allocate additional funding in its four-year budget – following an urgent business motion during Tuesday night’s meeting – means the long-awaited redevelopment is now on the cusp of reality.

Delivery of the transformative Northern Aquatic and Community Hub is a long-term G21 priority under its Addressing Disadvantage project.

COGG received $8.5 million in the 2021 state budget and is awaiting confirmation on another application for $8.26 million from the federal Local Roads and Community Infrastructure Fund (LRCIF).

A seven-day feedback period will seek community comment on the proposed additional Council funding before it is considered for inclusion in the final budget, to be endorsed at the end of June.

“This is a decision that has the capacity to change lives and outcomes for the people of Geelong’s northern suburbs.

“It’s also a commitment that befits our investment in the coming northern and western growth areas.

“We are at a make or break point for the project, and it’s time to get on with walking our talk.

“Of course we will continue to seek support and lobby hard for further funding from other levels of government, but we can’t drop our bundle now.”

Once built, the Northern Aquatic and Community Hub will deliver a state-of-the-art aquatic and community facility for the Geelong region in Norlane, creating $111 million in life-changing preventative health benefits during its first decade in operation.

As a result, the project is now ready to be put out for construction tender as soon as it is fully funded.