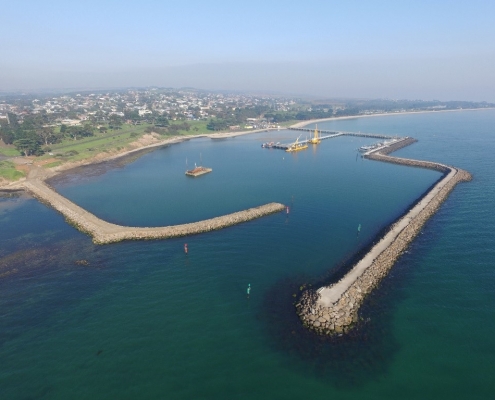 Works at Portarlington Pier on the Bellarine Peninsula have begun this week (23 April 2021) to upgrade and improve safety at the pier for commercial operators, pedestrians, recreational boaters and fishers using the facility.

Access to the Portarlington ferry will be improved with the building of a new covered walkway to separate pedestrians from vehicle access for commercial operators which currently share the space.

The Old Portarlington Pier remains closed for the safety of the community with priority access given as required. On-site works will pause during the peak summer break and are set to be complete by September 2022.

While these improvement works are underway, Parks Victoria will undertake routine maintenance dredging in Portarlington Harbour, providing improved access for vessels into the harbour.

As part of the work, the old pier which closed in 2018 will be demolished, while the improvements to the current pier are under construction.

This work has been funded under a $3.2 million Pier and Jetty Maintenance package where projects so far have included constructing a new all-abilities jetty at Tooradin and will also include improvements at Port Welshpool and Rye, funded under a $24 million investment under the Building Works initiative to stimulate the Victorian economy.

Other works funded under the package include an upgrade at Portland Trawler Wharf, and repairs to Middle Brighton Pier and the Queenscliff South Pier lifeboat shed.

More information on these projects can be found at transport.vic.gov.au

Planning To Begin On Dedicated Quarantine Hub
Scroll to top