Our coastline is a prominent asset and plays an important role in driving economic growth in the G21 region; strengthening our tourism appeal and supporting our thriving marine industries.

Upgraded marine facilities are also required to underpin the growing commercial fishing and aquaculture industries. The lack of adequate amenities is both an economic barrier and a safety issue.

Apollo Bay employs 22.2 per cent of Colac Otway’s tourism jobs and contributes $43 million dollars to the local economy annually. The Apollo Bay Harbour redevelopment will provide an attraction that encourages visitors to stay (and spend) in the area longer.

Apollo Bay’s harbour is also home to a commercial fishing fleet of 16, directly employing 35 people and generating an annual catch of $6.5 million. However, urgent repair and renewal is required to maintain this major contributor to the local economy, as well as improve the capacity of the harbour to stimulate economic growth.

The Portarlington Safe Harbour project provides a much needed enhancement of the existing marine infrastructure at Portarlington.

It supports the important aquaculture industry, adding value to the established and growing mussel industry in Portarlington, and sustaining a growing scallop harvesting sector.

Expansion of the Geelong Waterfront Precinct will provide a safe harbour through wave protection, additional marina berths and improved facilities for water-based events and activities.

The precinct is home to the annual Festival of Sails, which attracts more than 3,000 participants and 110,000 visitors, as well as state, national and world championship boating and yachting events. The Festival of Sails generates in excess of $14 million in economic impact for the region each year.

Redevelopment will allow expansion of the festival and help attract other major events to the waterfront.

Apollo Bay must capitalise on its unique location and develop in a way that will set it apart from other towns along the Great Ocean Road, maintaining its distinctive seaside fishing village character with a port as a working harbour.

The harbour needs investment to ensure its ongoing viability as a working harbour and visitor drawcard. Quality tourist infrastructure, community facilities and premium food, wine and indulgence offerings will help reduce the region’s seasonality and extend visitor length of stay (and spend).

Redevelopment of the Portarlington Safe Harbour will be an economic driver for the Bellarine Peninsula creating employment in the growing aquaculture industry and generating further opportunities for leisure and tourism.

Waterside commercial infrastructure and road and pedestrian access improvements to the harbour is now ready for investment (stage 2).

A redeveloped Geelong Waterfront Safe Harbour Precinct will provide the capacity to cater for a large increase in yachts and watercraft visiting and berthing safely in Geelong. It will improve public access to the water, support major events and enhance other recreation, economic and tourism opportunities.

Stage 1 of the master plan is complete and includes a floating pier that protects the marina from incoming rough water, a floating-berth marina with increased mooring capacity, integration of the Victorian Sailing School and its activities with RGYC.

Stage 2 of the master plan (unfunded) will include a new clubhouse and upgrades to the public realm within the area, including Fisherman’s Basin and an ‘Up and Over’ walkway with viewing platforms.

What has been committed

The federal government has committed:

The state government has committed: 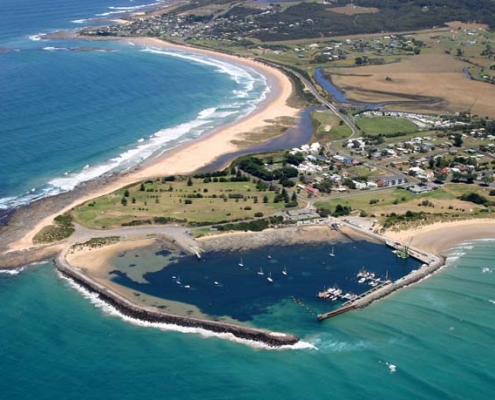 Economic Development Pillar 19/06/2020
Commercial and recreational boat owners will enjoy better access and improved safety at Apollo Bay Harbour thanks to the completion of dredging works ...

Economic Development Pillar 16/03/2016
The State Government is pledging $4 million towards Stage One of the Geelong Waterfront Safe Harbour Precinct. The redevelopment of the Royal Geelo ...

Transport Pillar 21/11/2016
Victorians and tourists will continue to enjoy a ferry service from Portarlington to Docklands as the State Government and Port Phillip Ferries build ...

Centre For Transport And Mobility Trials And Innovation
Scroll to top