Lethbridge Airport is a privately owned airport located between Geelong and Ballarat. It began operation in 1992 and is home to around 80 aircraft. One of Australia’s largest recreational flying clubs, the facility has 150 members, 50% of whom are from outside the Geelong region.

A Business Development Plan for the Airport, developed with support from the state government, has identified that Lethbridge Airport would make an ideal light aircraft aviation hub.

In 2011, the Lethbridge Airport site was rezoned to Special use Zone (SUZ3) allowing it to become an operational airport for the use of light aircraft and associated activities.

Over the last five years the airport has seen rapid expansion, with Golden Plains Shire Council auspicing $1.25 million from the state and federal governments to build new infrastructure, including:

The Airport site is being subdivided over a number of stages, with all 17 lots of stage one now sold. Eleven hangars have already been constructed, and the subdivision allows for a further 60 lots to be released in future stages. Total infrastructure investment for the completed stages is estimated at $39 million.

As well as that, the new fuel infrastructure has seen Lethbridge Airport become an important regional link for emergency services. The CFA, Ambulance Victoria and Victoria Police regularly use the airport as well as the self-service re-fuelling station, and the Airport is now a key asset in the regions firefighting efforts.

The next step in the airport’s development is the creation of a strategic precinct master plan, which will include the development of a terminal building and café, office space, training rooms and accommodation.

A government commitment of: 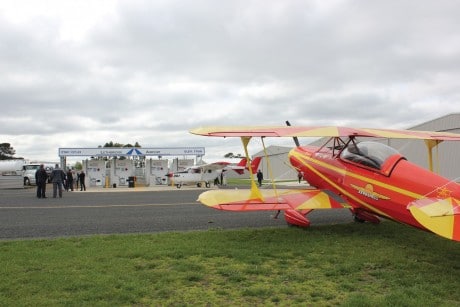