Barwon Water is partnering with the five councils in the G21 region and major export manufacturers on opportunities for two Renewable Organic Networks.

The projects will also create more than 80 new jobs across the construction and ongoing facility management stages.

They will boost energy production for electricity supply into the local grid and for the Colac project, will also transfer heat via an innovative hot water network to offset gas usage for Australian Lamb Company.

The project with the five councils in the G21 region will investigate building a renewable energy facility for organic waste collected by local councils.

The partnerships will look at the viability of a purpose-built facility, likely located on a Barwon Water site.

Benefits of the G21-region project include:

The project with the councils in the G21 region is in its early stages of development but if all key milestones are met Barwon Water is estimating completion by the end of 2023.

An Australian-first Renewable Organics Network is being built in Colac to use high-strength organic waste from Australian Lamb Company (ALC) and Bulla Dairy Foods for production of electricity and hot water.

The project is expected to create 17 construction jobs and 45 ongoing jobs.

Other benefits of the Renewable Organics Network Colac project include: 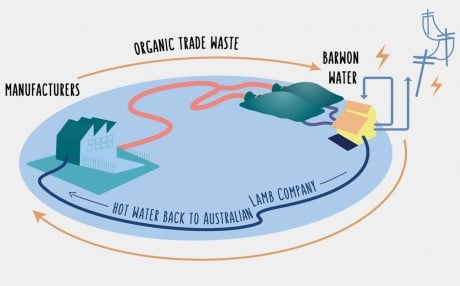