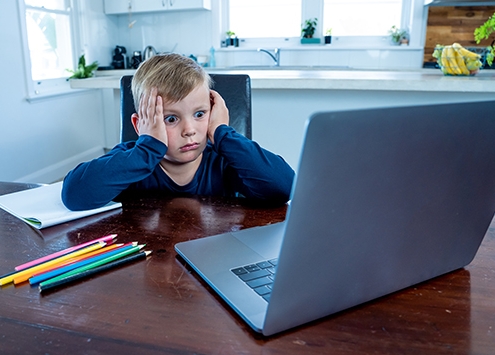 Can you imagine what our lives would have been like in the last 18 months without digital connection?

If the pandemic had landed just 10 years earlier, we’d be consigned to a locked-down life of board games or solitaire at the kitchen table, tuning in to radio news for updates and glued to the TV news at dinner time for a single, daily glimpse of the world outside. Working from home would have been a lonely, Zoom-less affair and online schooling a futuristic fantasy. Click and collect was unheard of, as were QR codes. Facebook was a novelty and e-commerce an activity attempted only by the most committed and savvy shoppers.

A lot has happened in 10 short years, a digital revolution no less, and just in time to make our calamitous 2020s just a little less painful.

Our love affair with smart devices was already intense when COVID turned up. And now the rigours of living with a pandemic have pushed most of us into an even closer relationship with the online world. Our wellbeing has relied on it. We’ve been compelled to upskill and learn new tricks. For most, our screens have been a lifeline, connecting us and keeping the wheels of school, work, laughter, love and distraction in motion.

But for some communities in our region, it might as well be 2010. Many of us are still waiting for the digital revolution to properly arrive. We know COVID has exposed many inequalities but the digital divide remains one of the biggest between cities and regions and never has it mattered so much as it does now. What was previously a nuisance is now a completely unsustainable state of affairs. High-speed digital connectivity is such a fundamental tool of daily life that without access to a reliable network, every facet of social and economic activity is compromised.

The G21 region, encompassing all our glorious townships from Apollo Bay to Colac to Lara to Queenscliff, is place of exquisite beauty but also a landscape which does not lend itself easily to the installation of high-speed digital fibre. Depending on your location and time of day, connections fade in and out, drop out completely or simply don’t work at all. Governments are chipping away at the problem but progress is slow and while we wait for the basics, the pace of digital innovation is always sprinting ahead.

The consequence of the digital divide for young people is particularly disturbing. The region’s 40,000 primary and secondary students do not have consistent access to online learning which has been essential during lockdowns. We don’t know the longer-term implications yet, but we do know at present one-in-three G21 students do not complete Year 12, compared to one-in-five in Melbourne. The region is at risk of falling even further behind.

In moving to online delivery of youth programs during COVID, Mark says young people’s physical isolation has been compounded by their lack of mobile reception and conversations often begin with the words “I’m just going to walk down to the bottom paddock so I can talk to you”.

“We are constantly checking in with our young people,” he says, “and we hear that they are bored, they have lost a sense of purpose, having difficult times at home and nowhere to go. Students are missing out on tertiary education because they could not connect to remote learning. They’re finding it hard to prepare for jobs and are losing touch with each other.

“But what’s worse is that often the most vulnerable young people don’t log in. If we can’t engage with a young person online we don’t know how to support them. We know there is risk-taking behaviour that we can’t do anything about,” he says.

Mark says there is also a fundamental flaw with online youth programming – there is no way to reach young people who have no digital access. They are completely forgotten. One in six households in the region do not have direct internet access compared with the average of one in eight in Melbourne. Digital access is even lower in some areas – one in four households in Colac and Corio-Norlane do not have internet connected to their homes, according to Infrastructure Victoria.

COVID has also revealed a lack of digital literacy and skills across the region. Our Chambers of Commerce report that a significant number of businesses have struggled to pivot to e-commerce and grasp new opportunities. G21 municipalities report that older community members and those from migrant backgrounds are missing out on information connecting them to jobs, services, education and social activities. It would be useful to understand if our skills have fallen behind because patchy digital networks force us to rely on non-digital systems.

Improvements have been made through the Commonwealth Government’s black spot program, while Deakin University, AARNet and City of Greater Geelong have co-invested to extend fibre to parts of the Bellarine. The Victorian Government has just announced fibre upgrades to help businesses in Lara and Colac, with more to come as part of a statewide investment. Rapidly growing communities in Armstrong Creek and Bannockburn should also be prioritised.

G21 is also calling for urgent investment in skills training to be rolled out to small businesses and the wider community through our network of libraries.

In 2022, our region will be in a very different place from where it was at the start of 2020. We have been through a major and life-altering shock. We will need to gather our energy, rebuild businesses, re-establish community confidence and re-adjust to school, work and life. Our permanent population will be bigger and the pressures of a growing region will pick up vigorously from where we left off.

When lockdown ends, we cannot afford to be stuck in 2010.