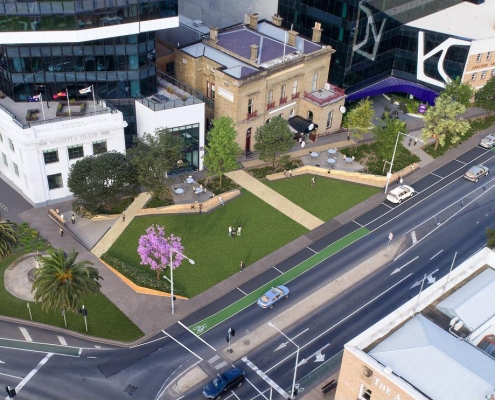 Geelong’s Green Spine is progressing, with construction on the northern side of Malop Street (Block 1) underway and a tender released for design and public engagement on later sections.

The section between Gheringhap and Moorabool streets will provide entry to Malop Street from Johnstone Park and the train station precinct, and includes a landscaped triangle park, heritage features from the Wadawurrung Traditional Owners, tree and grass plantings and seating.

The vision is to transform Malop Street into a vibrant and linear park, delivering more trees and green spaces into the heart of the city.

An ‘all-abilities’ standard will be applied to improve pedestrian movement along Malop Street, including connections to and from the new WorkSafe and NDIS buildings.

The single-lane bike path on the north of Malop Street will also continue through this block, which will feature a mix of indigenous and deciduous tree plantings.

Detailed planning work on the rest of the Green Spine, connecting green spaces and bike lanes are also underway and the community will be engaged in late 2021 to provide feedback on the look and feel of the sections from Yarra Street through to Eastern Park.

Works on Block 3 are expected to begin early 2022. Two tenders have been released for community engagement and design between Yarra St and Bellarine Street.

The Green Spine project is funded through the $382 million Geelong City Deal – a 10-year partnership between the Australian and Victorian governments and the City of Greater Geelong. It is a key project in the 10-year Revitalising Central Geelong Action Plan, implementation of which is a G21 Priority Project.

Once complete, it will connect Johnstone Park to Eastern Park and the Botanical Gardens via six blocks along Malop Street. This will add nearly a hectare of new green space to the CBD, enhancing business and tourism activity in the central city.

The first section of the Green Spine (Block 2) between Moorabool and Yarra streets was completed in July 2018.

For more on what’s happening in central Geelong, go to www.revitalisingcentralgeelong.vic.gov.au