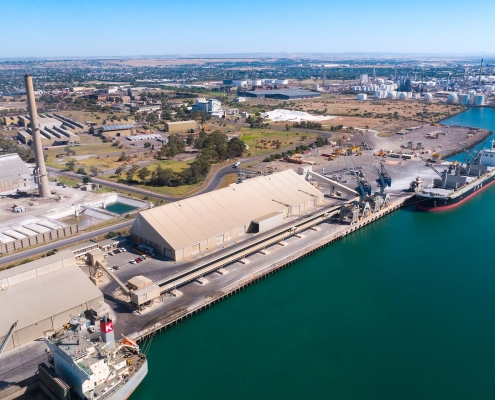 G21 welcomes the state government announcement that the new Ports Victoria body is to be headquartered in Geelong.

The new body will begin operating from Geelong on 1 July and will bring together the Victorian Regional Channels Authority and Victorian Ports Corporation (Melbourne) to lead the strategic management and operation of Victoria’s commercial ports and waterways.

G21 CEO Giulia Baggio said the new body’s headquarters being based in Geelong was welcome news, but cautioned against any loss of autonomy for GeelongPort from the creation of Ports Victoria.

“Geelong is an obvious site for Ports Victoria, given our central geographic location, being home to the state’s second-largest port and the region’s attractive lifestyle,” Ms Baggio said.

“The employment and economic benefits of having Ports Victoria in Geelong are important. Geelong has proven its credentials with TAC, WorkSafe and NDIA as an excellent place for government agencies to locate their headquarters.”

While Ms Baggio welcomed Ports Victoria coming to Geelong she cautioned against the Port of Geelong, and its commercial operator GeelongPort, losing any autonomy under the new structure.

“We are fortunate to have one of the most progressive and innovative port operators in GeelongPort. It’s important that this new structure does not impinge on or limit GeelongPort’s operational strengths,” Ms Baggio said.

“Ports Victoria has arisen from an independent review of the state’s ports. The review will inform a new Victorian Port Strategy, currently under development. We will be watching the outcome of that strategy development process very closely to ensure the operations of GeelongPort are not adversely impacted.”

The state government says the creation of Ports Victoria is a key finding from the Independent Review of the Victorian Ports System, a comprehensive review set to cut red tape, boost safety, and improve the way this vital industry operates.

The government says the Department of Transport will use the broad industry analysis to suggest “changes to increase efficiency and simplify operations” for all stakeholders.

Other changes have been recommended to ensure there is a consistent process for issues like navigational safety, pilotage, and towage and to improve safety for operators and regulators, a state government statement said.

The full response from the government to the review will be released later this year.

For a summary of the independent review’s findings visit transport.vic.gov.au