Booming population growth is creating a strong demand for modern arts and cultural facilities in the G21 region.

The implementation of the Cultural Precinct Master Plan is well underway, however funding is still required to fully realise stage 3 of the Arts Centre’s master plan, to redevelop the Geelong Gallery and for work on the public realm.

Geelong Gallery is respected nationwide as one of the leading – and oldest – regional galleries in Victoria. Prior to the COVID-19 lockdown in March 2020 Geelong Gallery demonstrated consistently strong growth in attendance and audience engagement over the previous five years, with visitation tripling during this period. In 2017-18 with the hosting of the 2017 Archibald Prize, the Gallery attracted 117,000 visitors. The Gallery presented the Archibald Prize again in 2018, and in 2018-19, welcomed 160,000 visitors. The economic impact of the Archibald Prize in Geelong over the two-year period was $14.25 million. With expanded and upgraded facilities the Gallery would attract 200,000 visitors annually.

The Gallery’s ambition to contribute more to Geelong’s ‘clever and creative’ economic and cultural renewal is seriously restricted by a lack of adequate space for ambitiously scaled, drawcard exhibitions. Restricted space limits display and constrains storage of what is regarded as a nationally important collection owned by the people of Geelong.

The redevelopment of Geelong Gallery through a significant expansion into the Geelong Town Hall would present a new model of a regional art museum for the 21st century: it would be a cultural, learning and social space that honours the civic and ceremonial heritage of the Town Hall.

The completion of Geelong Arts Centre and redevelopment of the Geelong Gallery is a critical element of the Revitalising Central Geelong Action Plan, which will regenerate of Geelong’s Central Business District.

The implementation of the Cultural Precinct Master Plan is well underway.

Refurbishment of the Old Courthouse Building was completed in 2011 and the Geelong Library and Heritage Centre opened in late 2015. The Ryrie Street works for the Geelong Arts Centre (Arts Centre) was finished in late 2019, while the Little Malop Street redevelopment will commence in 2020.

Funding is still required to:

BENEFITS FOR VICTORIA AND THE G21 REGION

The Geelong Cultural Precinct will:

The state government has committed:

The federal government has committed: 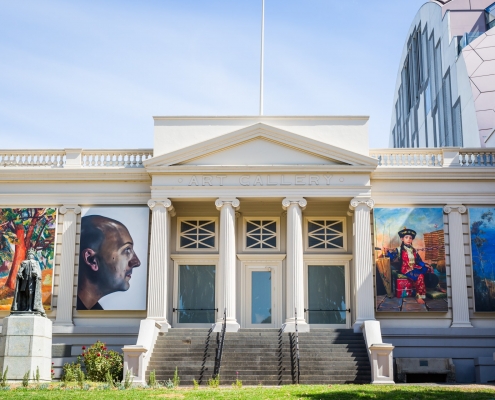 Arts and Culture Pillar 20/11/2019
The doors have opened on a new era of creativity at Geelong Arts Centre with the unveiling of its new Ryrie Street building this month. The opening ...