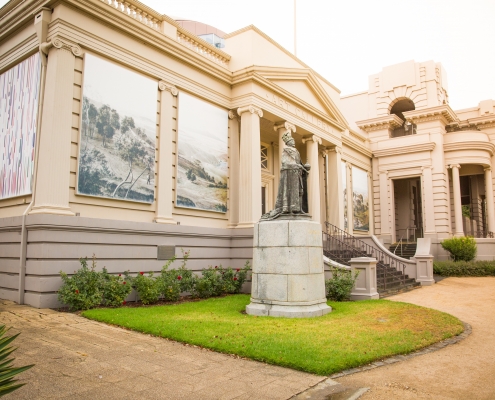 Plans are underway to double the current footprint of the Geelong Gallery in a major expansion of one of our region’s most popular cultural assets.

The Victorian government will join forces with the City of Greater Geelong and the Geelong Gallery Board to update the business case to expand the Gallery into Town Hall, with a $125,000 grant from the $10 million Enabling Tourism Fund.

The gallery’s ambition to lead the delivery of Geelong’s “clever and creative” 30-year vision for economic and cultural renewal is seriously hampered by the current lack of adequate space for large-scale, drawcard exhibitions.

Restricted space also limits the display and storage of, and public access to what is regarded as a nationally important collection owned by the people of Geelong. The gallery holds around 6,000 works of art but only has the capacity to show 2 per cent of this.

The innovative revamp will feature a cultural, learning and social space that honours the civic and ceremonial heritage of the Town Hall – a striking model for regional art galleries in the 21st century.

The Gallery presented the Archibald Prize in 2017, and again in 2018, welcoming 276,000 visitors to the gallery across the two years and injecting $14.25 million into the local economy.

Earlier this year, the Gallery hosted RONE in Geelong, its evocative and ghostly roomscapes attracting almost 47,000 people and contributing $7.8 million to the economy.

With expanded and upgraded facilities the gallery will be able to attract 200,000 visitors annually and strengthen Geelong’s designation as a UNESCO City of Design.

Geelong Gallery’s expansion is a central element of Geelong’s Cultural Precinct Masterplan, a G21 Priority Project that has propelled the successful redevelopment of the Geelong Library and Heritage Centre and the Geelong Arts Centre.

It will also a play a key part in the Revitalising Central Geelong Action Plan delivering huge flow-on benefits for the growing arts, culture and hospitality precinct on Little Malop Street.

The gallery will partner with Aalto and John Wardle Architects to deliver the Business Case by the end of 2021.

Meanwhile, COVID restrictions are playing havoc with upcoming exhibitions. The highly-regarded Frederick McCubbin exhibition, due to open in early September, has been postponed. The gallery team is hoping for an October opening, with the possibility of extending the exhibition over summer.

Assuming no further restrictions, Archie 100: A Century of the Archibald Prize will open in November. The 100th anniversary exhibition will present an eclectic selection of Archibald portraits from the 20th century. Geelong Gallery is the exclusive Victorian venue for Archie 100 – don’t miss out!

Tickets for both events are available here: https://www.geelonggallery.org.au/whats-on/exhibitions#upcoming